At Planet, we believe that making information accessible and transparent leads to greater global security and stronger political accountability. Thanks to invaluable partnerships, our satellite data is actively being used to shine a light on covert operations and illicit supply chain processes around the world. The Center for Advanced Defense Studies, otherwise known as C4ADS, is a non-profit organization located in Washington, D.C. that provides data-driven analysis and evidence-based reporting on global conflict and transnational security issues. Through Planet, C4ADS uses satellite data to conduct in-depth investigative studies to monitor North Korea’s illicit procurement networks.

Despite the international community’s efforts to sanction North Korea for its development of weapons of mass destruction, the country continues to receive illicit commodity supplies through adept evasion techniques. Notably, North Korea has obtained imported refined petroleum products needed to make weapons through secretive supply transfers at sea. By analyzing Planet’s satellite images in tandem with ship tracking data, C4ADS analysts Lucas Kuo and Lauren Sung, in collaboration with analysts at RUSI (Royal United Services Institute), have revealed in an in-depth report critical information regarding where and how these covert operations are conducted.

“We saw that there wasn’t significant research into who was delivering fuel or any research into how this whole system functioned,” said Senior Analyst at C4ADS Lucas Kuo. “In order to procure fuel from the international market and deliver that to North Korea, it requires a sophisticated network and pattern abroad.”

Through the use of Planet’s satellite tasking system, these analysts were able to uncover how North Korea engaged in an organized criminal network outside of their borders to obtain fuel in violation of international sanctions. A complex and convoluted shipping system revolving around the tanker “Diamond 8”, allowed for fuel to be passed from one ship to another eventually arrive in North Korean ports. 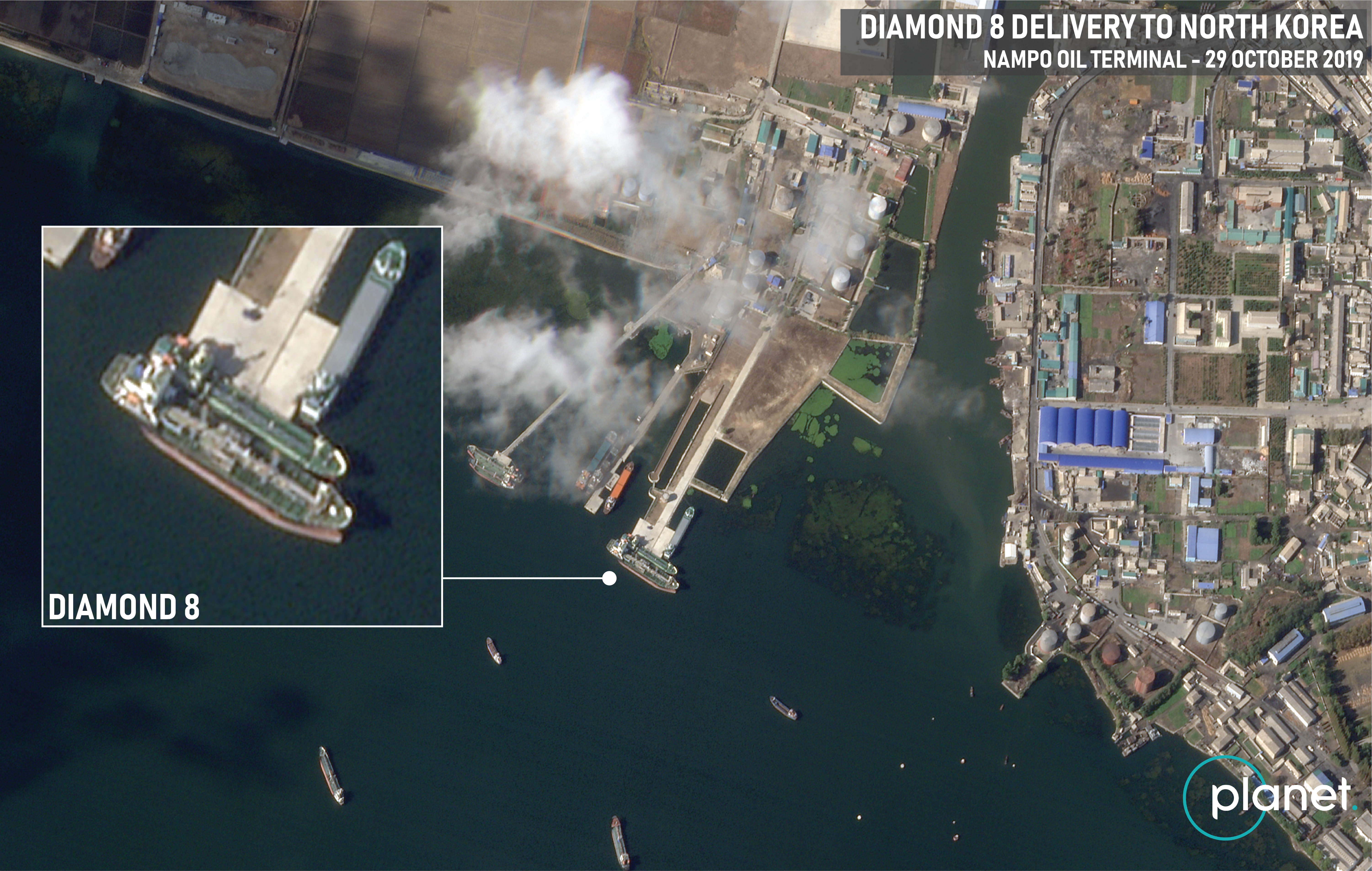 “It’s a constant game of cat and mouse and they are always trying to stay ahead. You cannot see what they are doing without satellite data,” said C4ADS Analyst Lauren Sung. “With the cost of enforcement going up, it’s important to share data across the public and private sector.”

C4ADS used image measurements and AIS transmissions to identify the “Diamond 8” in Planet satellite imagery, which allowed the analysts to track the ship as it smuggled fuel to North Korea. Through further in-depth investigations, the analysts were able to track the tanker as it made its way along the coastline of Taiwan and covertly crossed paths with ships managed by a Singaporean energy trading company and its affiliates.

“It is very hard to deny that a ship is in a certain location when you have it in imagery. We have the exact locations and exact time. It is some of the best evidence that we can offer to monitor and enforce international sanctions on North Korea. Our core mission is to use publicly available data to expose these illicit networks. Information about North Korea is typically seen as closed off to the public, but as we have shown, as soon as you start to leverage your public and commercial satellite data, we can expose North Korean operations,” said Lucas.

In recent months, these analysts further identified deliberate ship identity laundering linked to North Korean sanction violations. In “Unmasked,” a new C4ADS report published today, they used data from the automatic identification system (AIS), to find a U.N.-sanctioned oil tanker disguised as a new ship and illegally registered under a new name to hide its sanctioned status. By defrauding the International Maritime Organization to launder its identity, the ship was able to operate for nearly three years before being detained. This type of work is seen as the cutting edge of sanctions evasion techniques and requires high-cadence and reliable data monitoring technologies like Planet’s satellite operations. 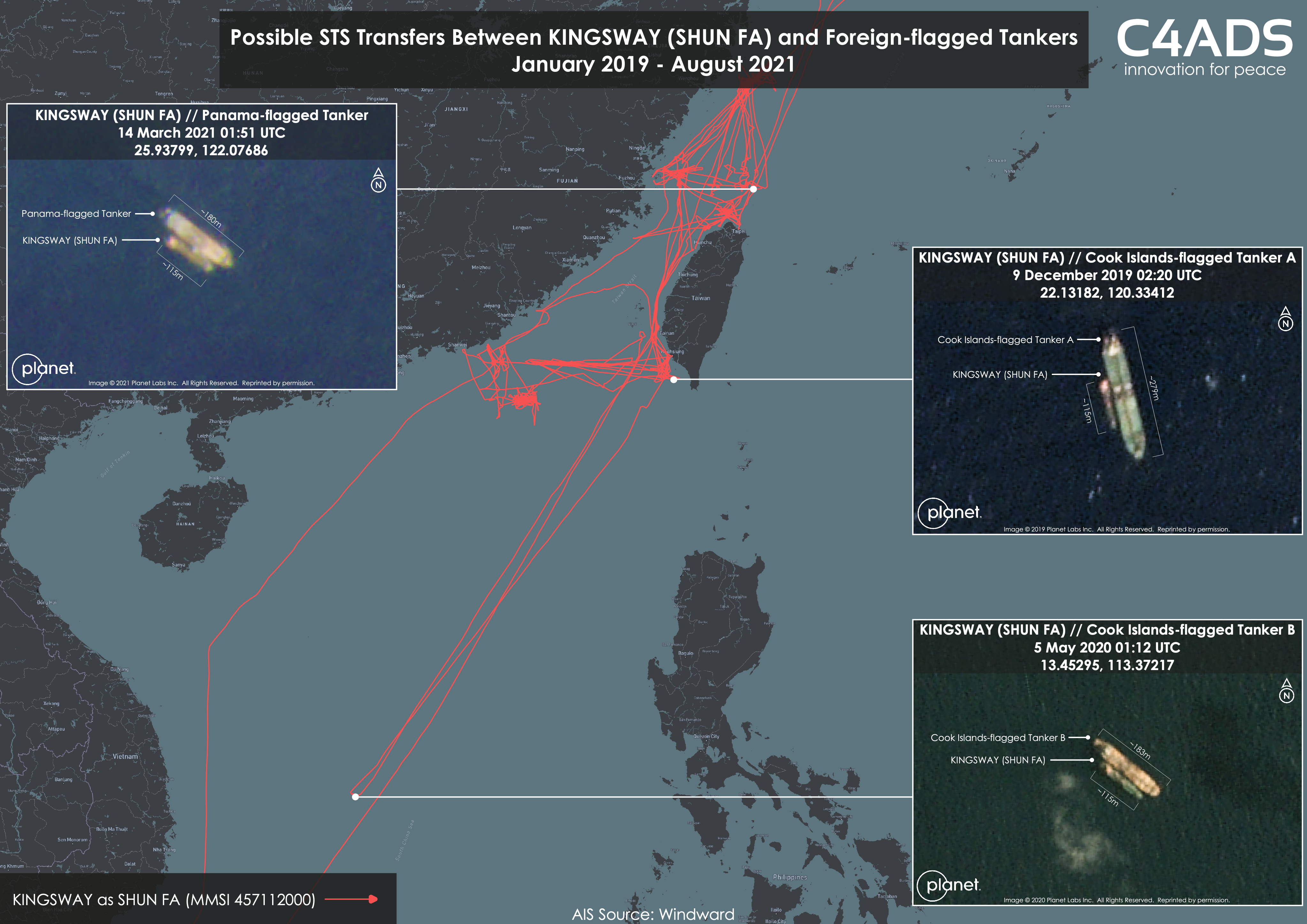 “Especially when at sea, Planet sometimes is the only provider as we leverage SkySats’ high-frequency in our work. The ease that we can order a tasking over an area of interest is incredibly helpful with the interface and dashboard being really effective. With those shots, we are able to make high confidence assessments that this ship is the one that made that transaction,” said Lucas. “Ships have a registered identity, a digital identity (electronic signature), and a physical identity. You have to look at all three identities to investigate them. This is why imagery is so important; while ships may be able to acquire a new registered identity, or to broadcast a different digital identity on AIS, it is harder to make significant structural changes that fundamentally alter their physical identity. We need satellites, it’s no longer an optional thing.”

C4ADS will be presenting on their work toward a more transparent world at our upcoming user conference in October. Register now for free.