Smoke from a California wildfire spreads east in this view from the International Space Station taken on August 17, 2021. Astronaut photograph courtesy of the Earth Science and Remote Sensing Unit, NASA Johnson Space Center. 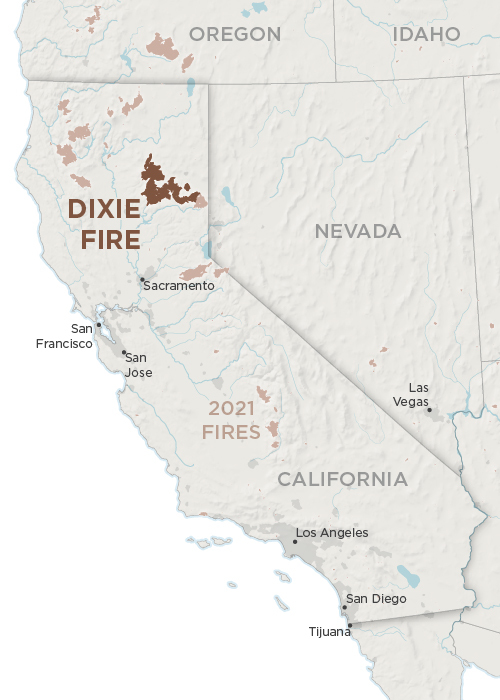 Although wildland fires have always been present in the western United States, recent years have brought increasing numbers of fires. These fires are now burning hotter, over wider areas, and causing more damage to human infrastructure and natural landscapes than ever before. The causes are numerous  and multifaceted, including climate change, regional drought, historical forest management, aging infrastructure, and increasing populations along the urban/wildland interface. To help mitigate this threat, western authorities are turning to new technologies, including high-frequency and high-resolution data from Planet’s constellations of satellites.

California, with forested mountains, chaparral-covered hills, and dry summers due to its largely Mediterranean climate, has been particularly hard hit. Nine of the top ten largest fires in state history have occurred in the past decade. The 2021 fire season grew so severe that on August 30, 2021, the U. S. Forest Service closed all national forests in California to “better provide public and firefighter safety.” The order remained in effect for more than two weeks, and portions of several national parks, including Lassen, Kings Canyon, and Sequoia were closed due to fire activity through at least mid-October. 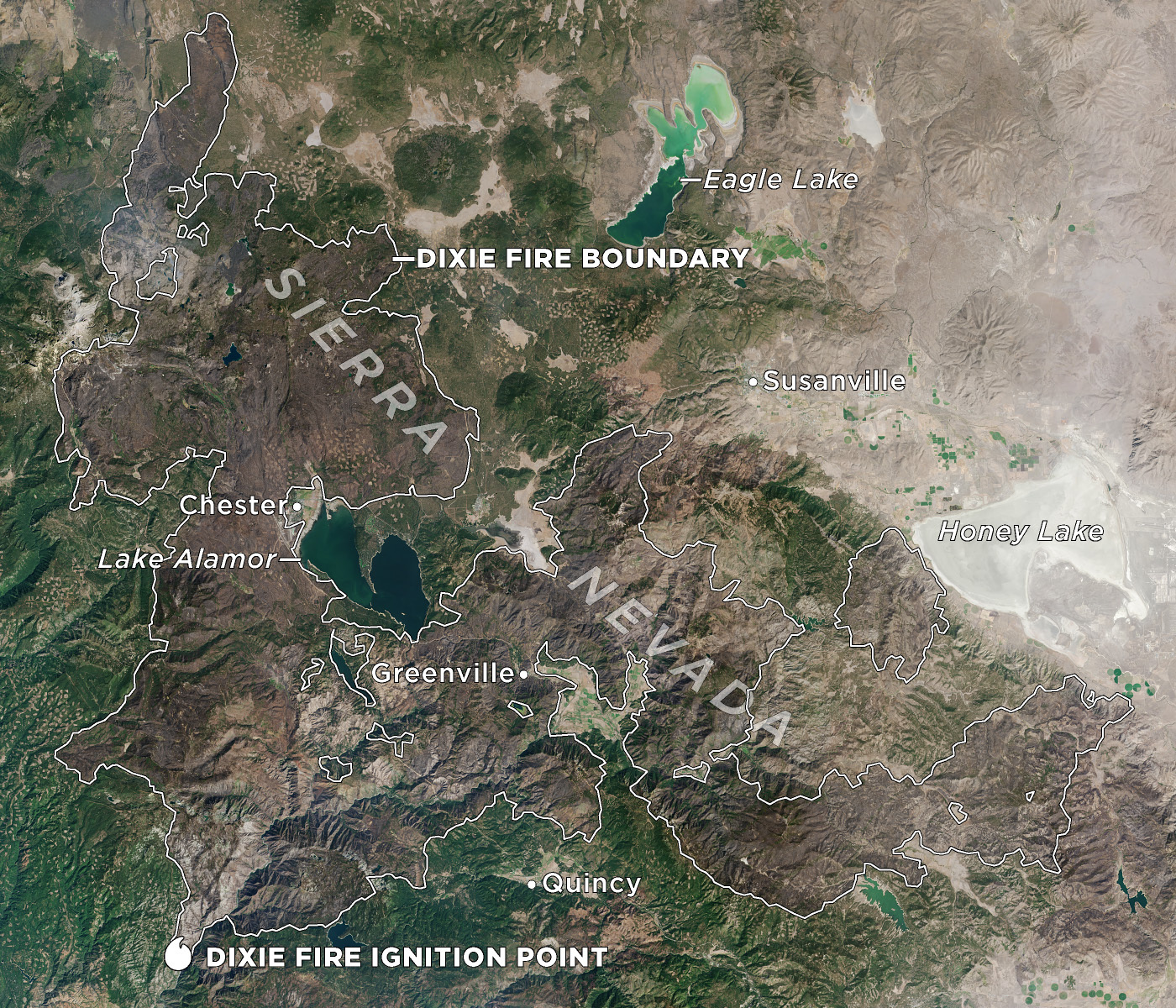 Planet’s monitoring data provide an unprecedented combination of frequency, scope and resolution, allowing observation of large-scale events as they unfold. This mosaic of the Dixie Fire was collected between September 29 and October 2, 2021, with the bulk of the data from September 30. It covers an area 126 kilometers (78 miles) wide with a full resolution of 3.9 meters per pixel. At the time roughly 1,600 people were extinguishing remaining hotspots and repairing damage caused by fire-fighting efforts. Look carefully, and you can see lingering smoke in the northwest of the fire perimeter (upper left corner). Fire perimeter data from the National Interagency Fire Center.

During the course of this dire fire season, the Dixie Fire was the largest and most damaging of all. At 963,309 acres (3,898 square kilometers) the blaze was California’s second-largest ever, and the first known to cross the crest of the towering Sierra Nevada. Ignited on July 13 near Paradise, California the fire eventually destroyed 1,329 structures, damaged 95 more, and resulted in the death of a first responder. Over the next four months, up to 6,579 people helped to contain the Dixie Fire’s spread, and as of October 20th it was still considered active, at 94% contained.

Up-to-date information — on everything from vegetation health to fire behavior — is critical in the effort to combat wildfires. Yet with a fire so large, it’s impossible to get a comprehensive picture of the event from the ground, or even from the air. It requires another perspective, like the view from orbit. Planet’s medium-resolution monitoring constellation, augmented by pinpoint, high resolution satellites, can help give fire fighters the data they need to mitigate the threat posed by fire, effectively respond, and rehabilitate burned areas.

Even before a fire starts, Planet’s data can help land managers mitigate the threat. The California Forest Observatory — a collaboration between Planet, Salo Sciences, and other partners — creates and distributes statewide maps of forest structure and available fuel. These maps serve two main purposes. By showing where forests are vulnerable, they can help foresters plan efforts to remove excess fuel and make the landscape more resilient to fire. They can also improve the models of fire propagation that firefighters use to plan the response to a fire in progress. 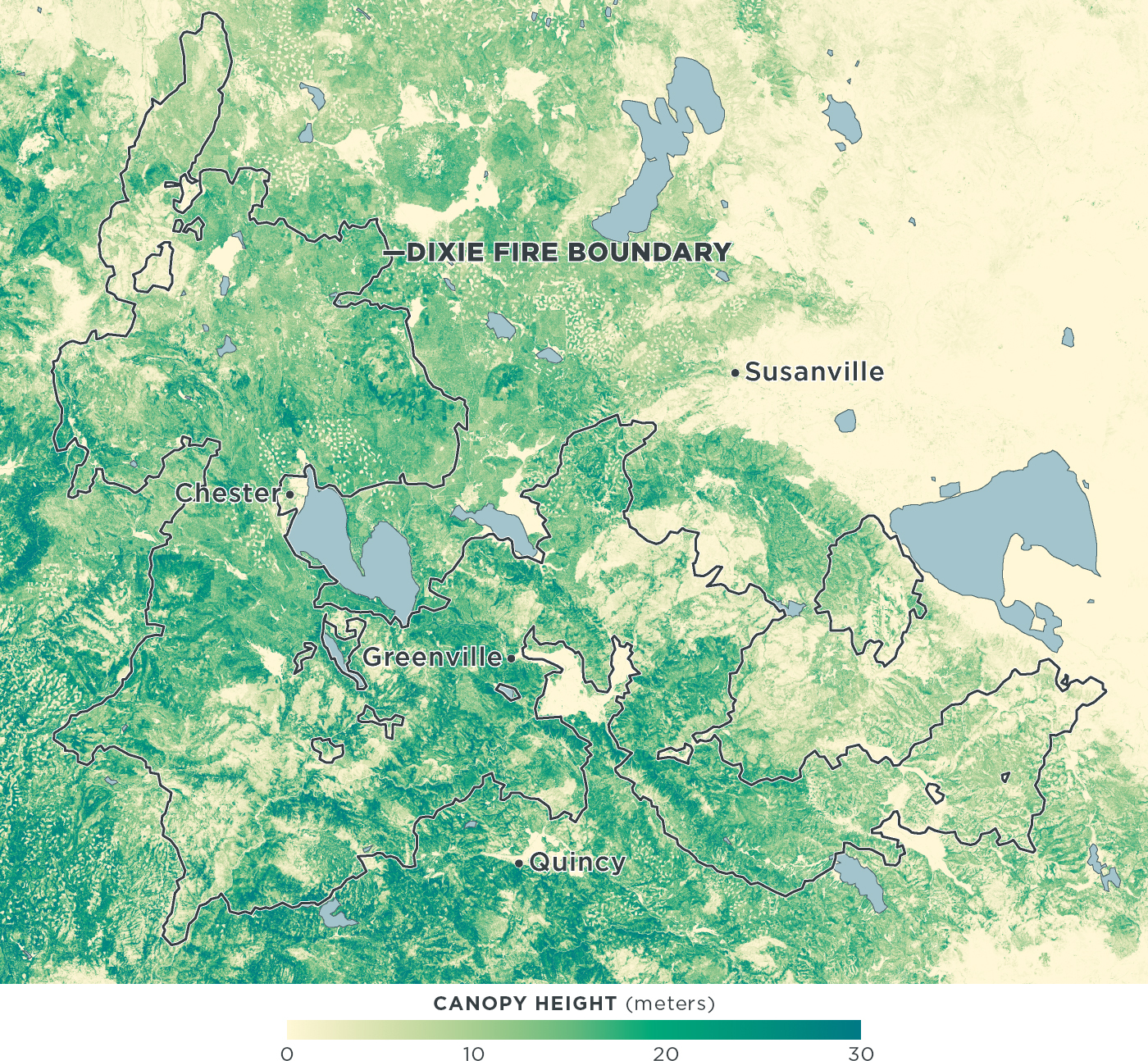 One important component of fire risk in forests is canopy height — how tall are the trees? According to the California Forest Observatory, canopy height is the distance from the top of the canopy to the ground and indicates aboveground biomass that can be consumed in a crown fire. In other words, it’s a measure of how much total fuel is available to feed a fire.

Salo Sciences builds these maps by using deep learning to combine precision lidar data collected over small areas, with satellite data that provides broad coverage. Lidar is a technique that uses lasers to measure the three-dimensional structure of a forest. It’s typically flown on aircraft, and therefore only available under the aircraft’s flight path and for a limited time period. Satellite data, from Planet and government-operated satellites like Landsat and Sentinel, is available globally and over long time spans, but typically only measures the top of the forest. Deep learning models marry the strengths of both techniques to estimate the three dimensional structure of vegetation over a wide area and multiple years.

As a monitoring constellation, Planet’s Doves and SuperDoves are continuously collecting data, imaging nearly the entire Earth’s landmass every day. This allows our satellites to map the progress of a fire over time, weather (and smoke) permitting. Imagery delivered within hours of collection can help keep the public and firefighting officials informed of a fire’s progress. 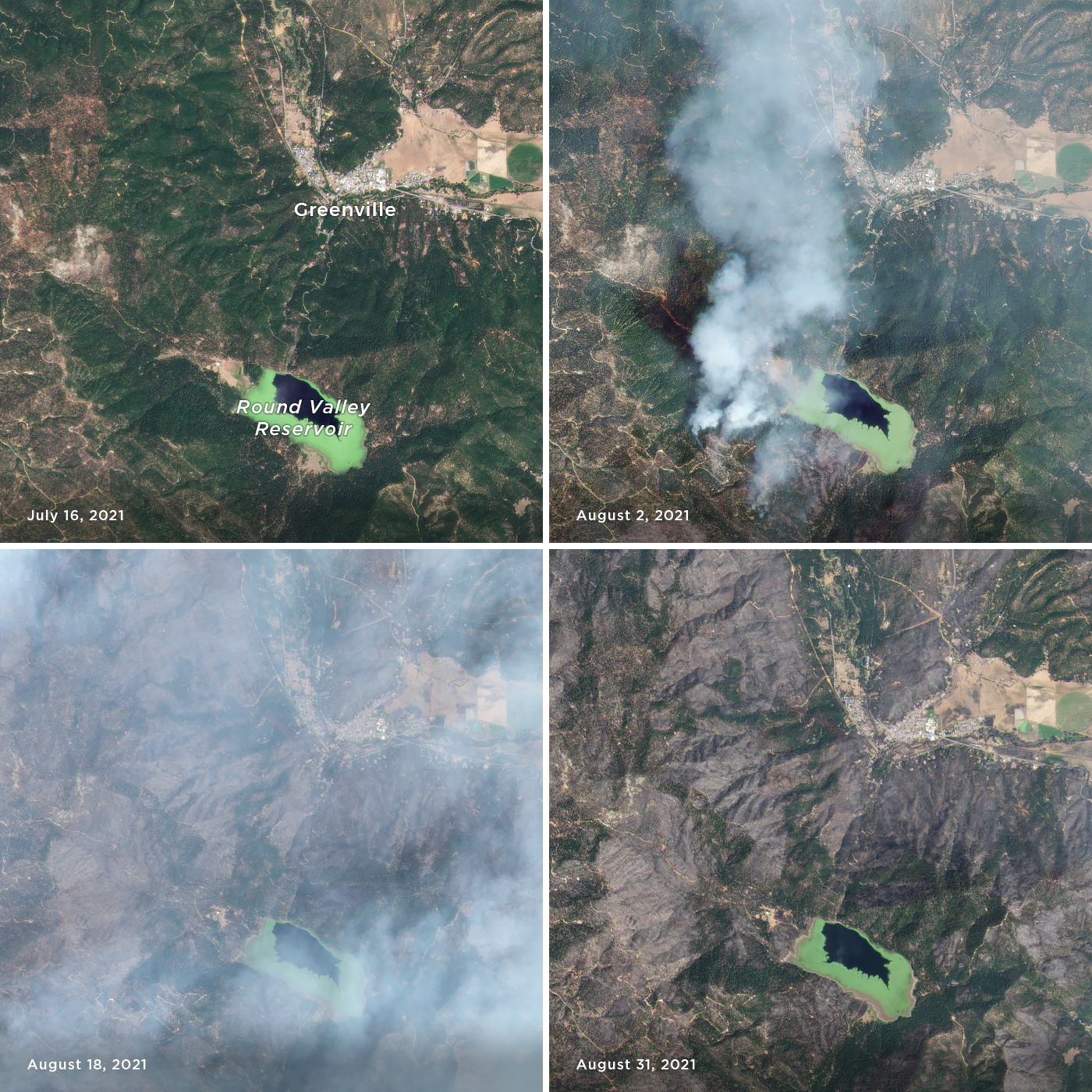 These true-color PlanetScope Images show the progress of the Dixie Fire as it approached and then swept over the town of Greenville, California in July and August, 2021.

With a swath width about 22 miles (36 kilometers) across, monitoring images complement direct observation and airborne instruments collecting very high resolution data over active flames. The relatively wide field-of-view can aid decisions on the allocation of resources on a regional scale. Frequent data collection provides an opportunity to see the ground if smoke temporarily clears, and enables assessment of recently-burned areas for leftover fuel — especially in hard to access locations. PlanetScope data can even serve as a source for identifying points to image at high-resolution with SkySat, zooming in on areas of particular interest.

Satellite imagery continues to play a role in fire management even after the flames have passed by and fire crews have moved on. In the wake of a fire damage needs to be assessed, burn severity needs to be measured, and degraded landscapes need to be revitalized. 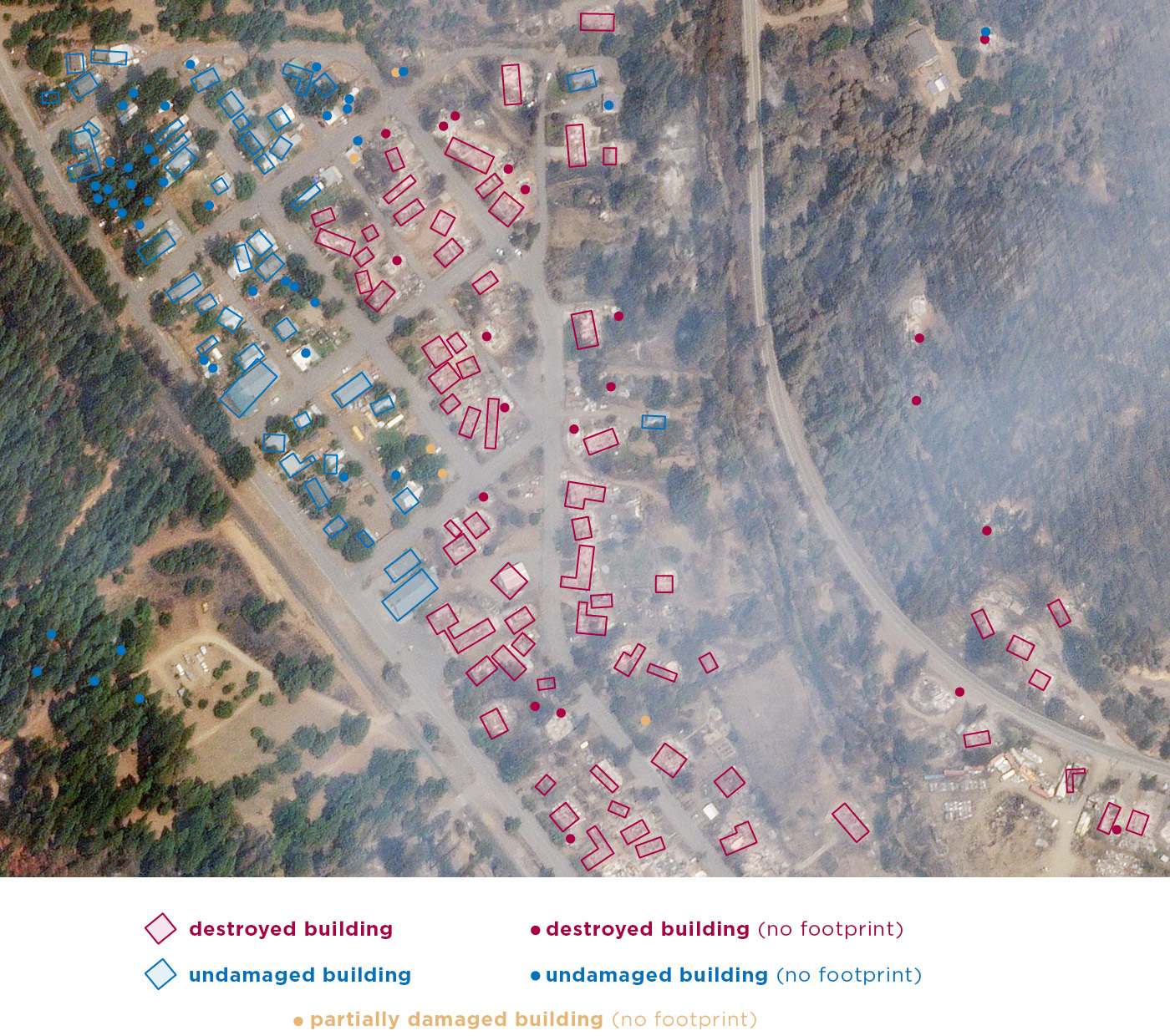 When the Dixie Fire roared through Greenville, it destroyed many buildings (red), but left others untouched (blue). A relative handful were partially damaged (orange). Before residents can be allowed to return, local officials need to do a careful, house-by-house inspection.Damage assessments in Greenville, California by Cal Fire and the Plumas County Sheriff’s Office superimposed on a SkySat image acquired on August 18, 2021 and building footprints from the Oak Ridge National Laboratory.

Of all the communities impacted by the Dixie Fire, Greenville was the hardest hit. Dozens of the town’s  buildings were damaged or destroyed on the evening of August 4th. Before residents were allowed to return, the Plumas County Sheriff’s Office needed to conduct a damage assessment — carefully determining which structures were destroyed, which were damaged, and which remained untouched. It is a painstaking process involving door-to-door inspection and extremely high resolution mapping from drones.

To aid in this effort the Sheriff’s office used Planet’s SkySat data not to directly determine the degree of damage, but rather to plan drone flight paths and pinpoint the locations from which to collect 360˚panoramas. The drone data helped determine safe routes through the town and prioritize inspections. This combination of data sources improved the efficiency of mapping efforts and enhanced coordination between organizations responding to the disaster.

In many cases forest fires in California continue burning until the autumn season, when storms bring rain and even snow to the mountains. Although precipitation stops the spread of fires, it brings a new threat: flooding. Healthy vegetation slows the downhill flow of water after a rainfall, moderating streamflow. Water can flow freely down scorched hillsides, newly devoid of vegetation. Worse, extremely hot fires can make soil hydrophobic — the soil actually repels water, rather than soaking it up. This exacerbates an already bad situation and catastrophic flooding is common downstream of burn scars, sometimes for years after a fire. 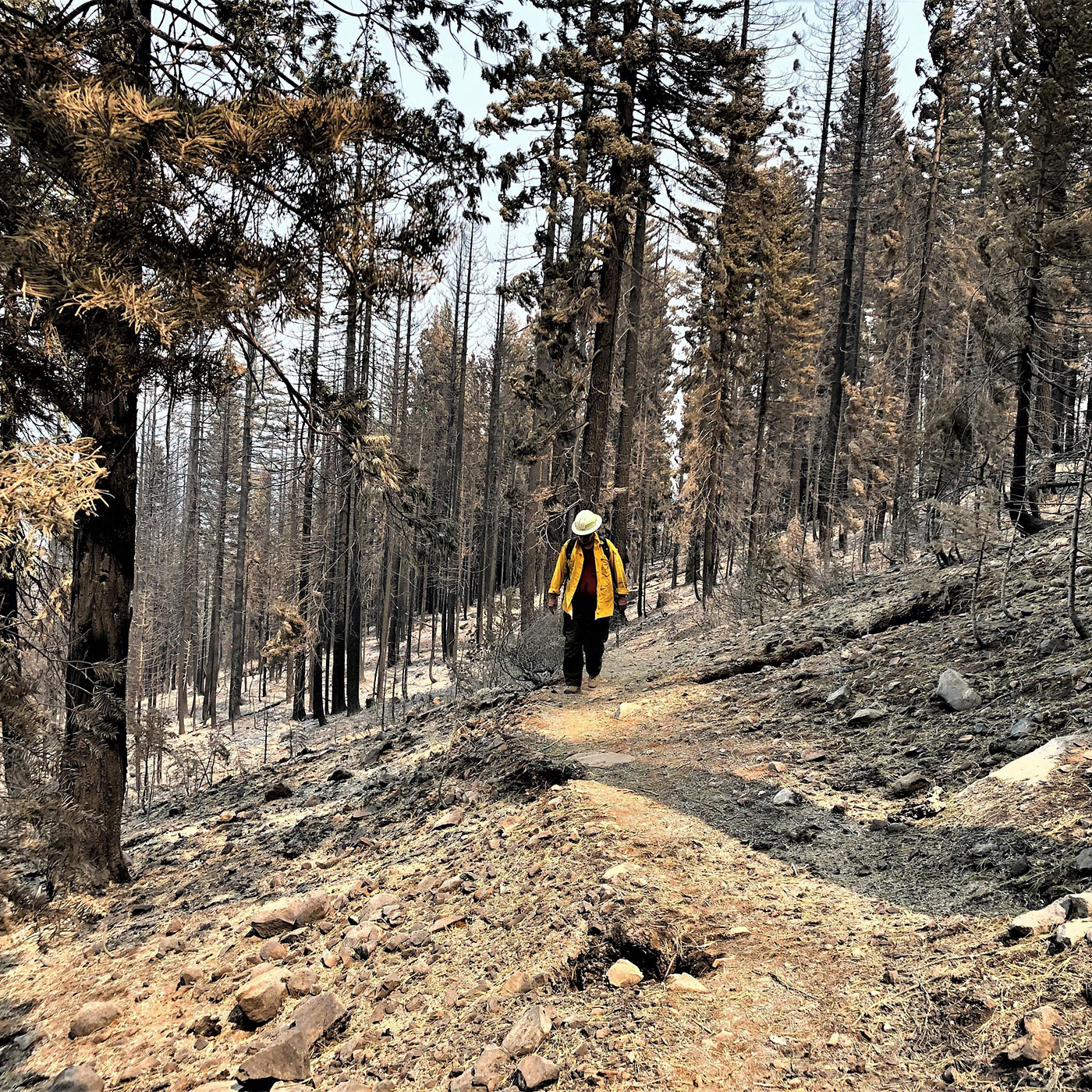 To mitigate the threat of post-fire flooding, Burned Area Emergency Response teams evaluate the status of vegetation and soils in affected areas. Rapid response is crucial, as rain often falls shortly after a fire ends, and some types of vegetation regrow quickly after a fire, complicating interpretation of data collected weeks or months later. Fire perimeter data outlines the extent of a fire, but not its impact. More detailed mapping is required to characterize the conditions at different locations. Planet’s unique combination of near-daily data collected at 3 – 5 meters per pixel provides a potential resource for rapidly evaluating vegetation health and burn severity to aid these mapping efforts. 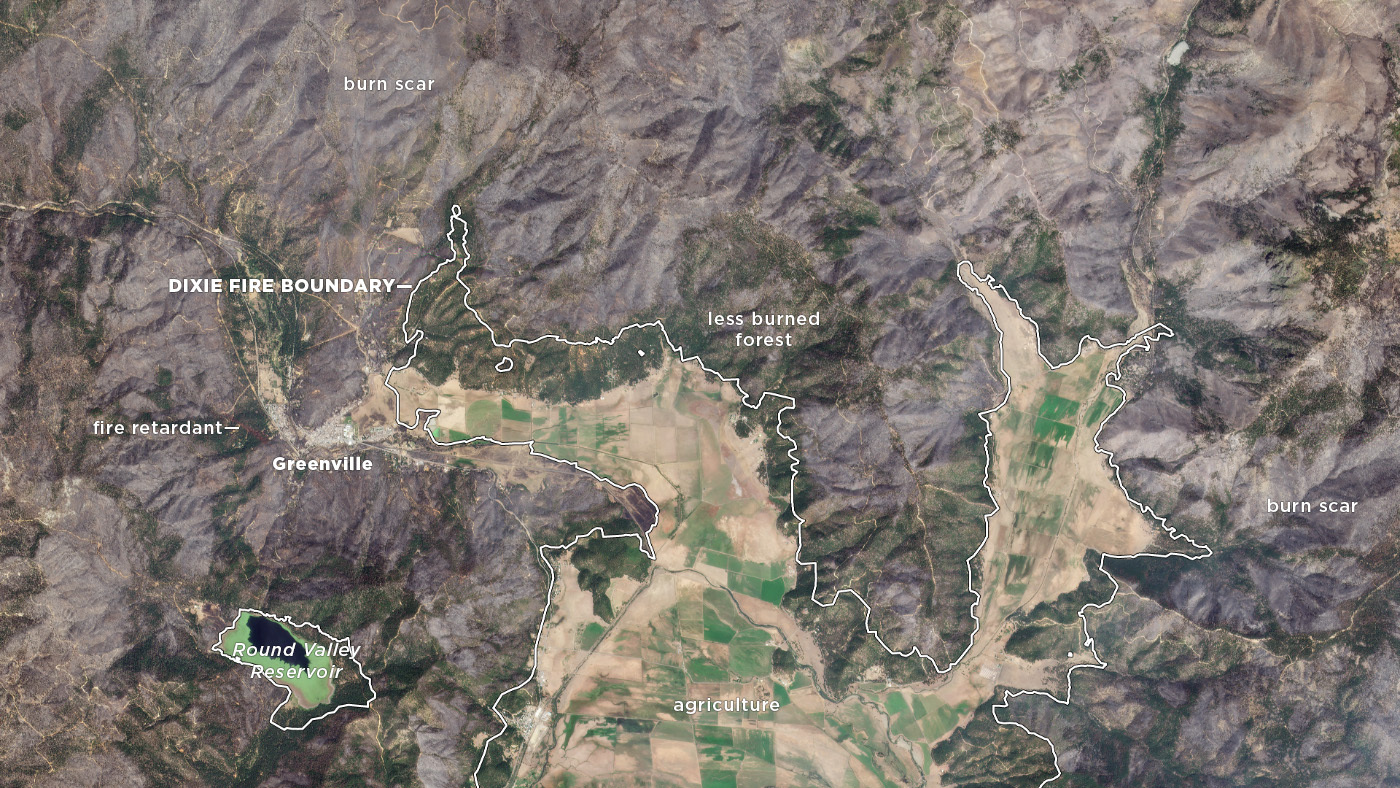 True-color PlanetScope image collected August 31, 2021, showing a portion of the Dixie Fire burn scar, including the town of Greenville, California. The relatively flat, cultivated Indian Valley is outside of the fire perimeter (white line). The amount of damage within the burn scar varies dramatically — gray and black areas are likely severely burned, and green indicates standing vegetation. In this image, however, it is difficult to determine how healthy the remaining vegetation is. 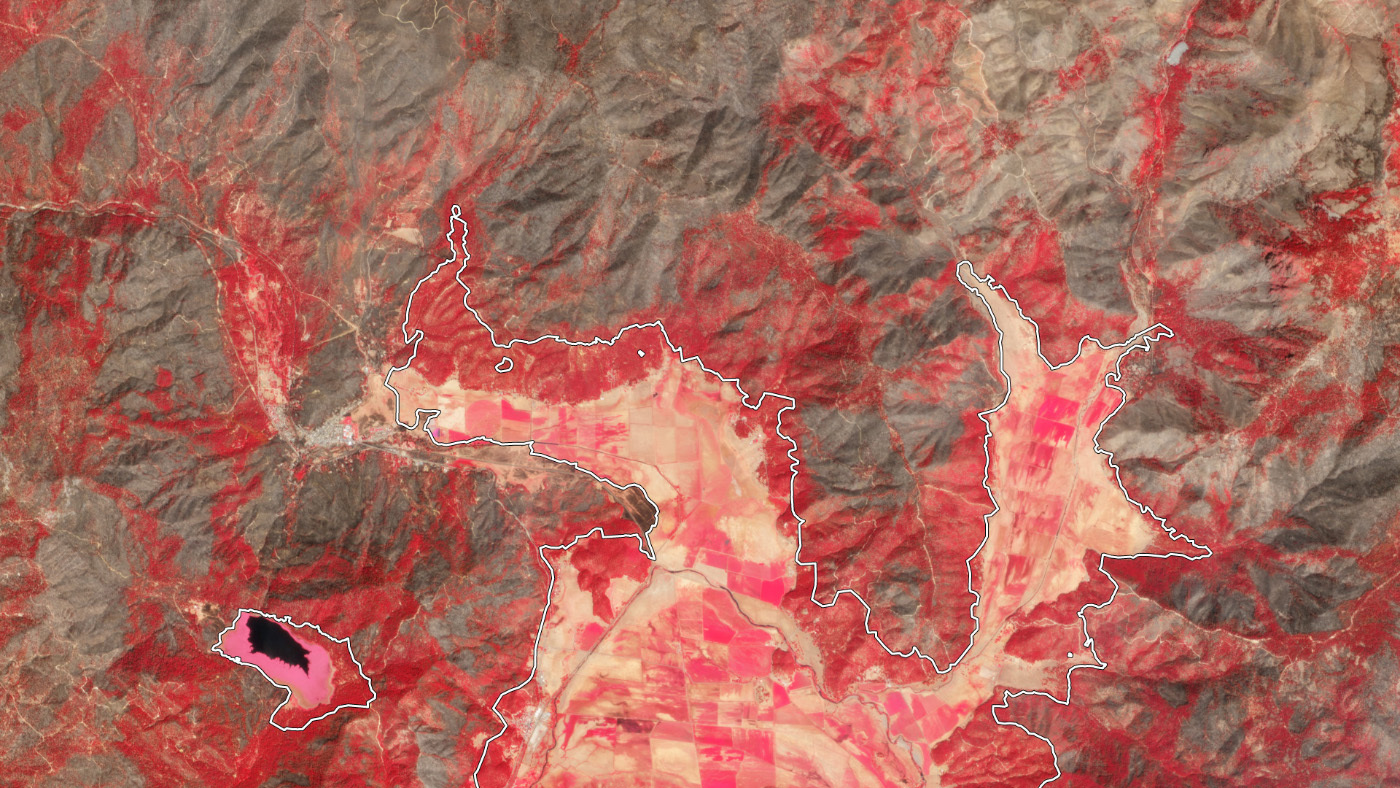 This near infrared, red and green false-color image shows additional details of vegetation health and burn severity. Bright pink is the most vigorous vegetation (agricultural fields and the aquatic vegetation on Round Valley Reservoir (lower left)), darker reds indicate more substantial vegetation, and orange or rust color could be scorched vegetation or unburned, dry grass. 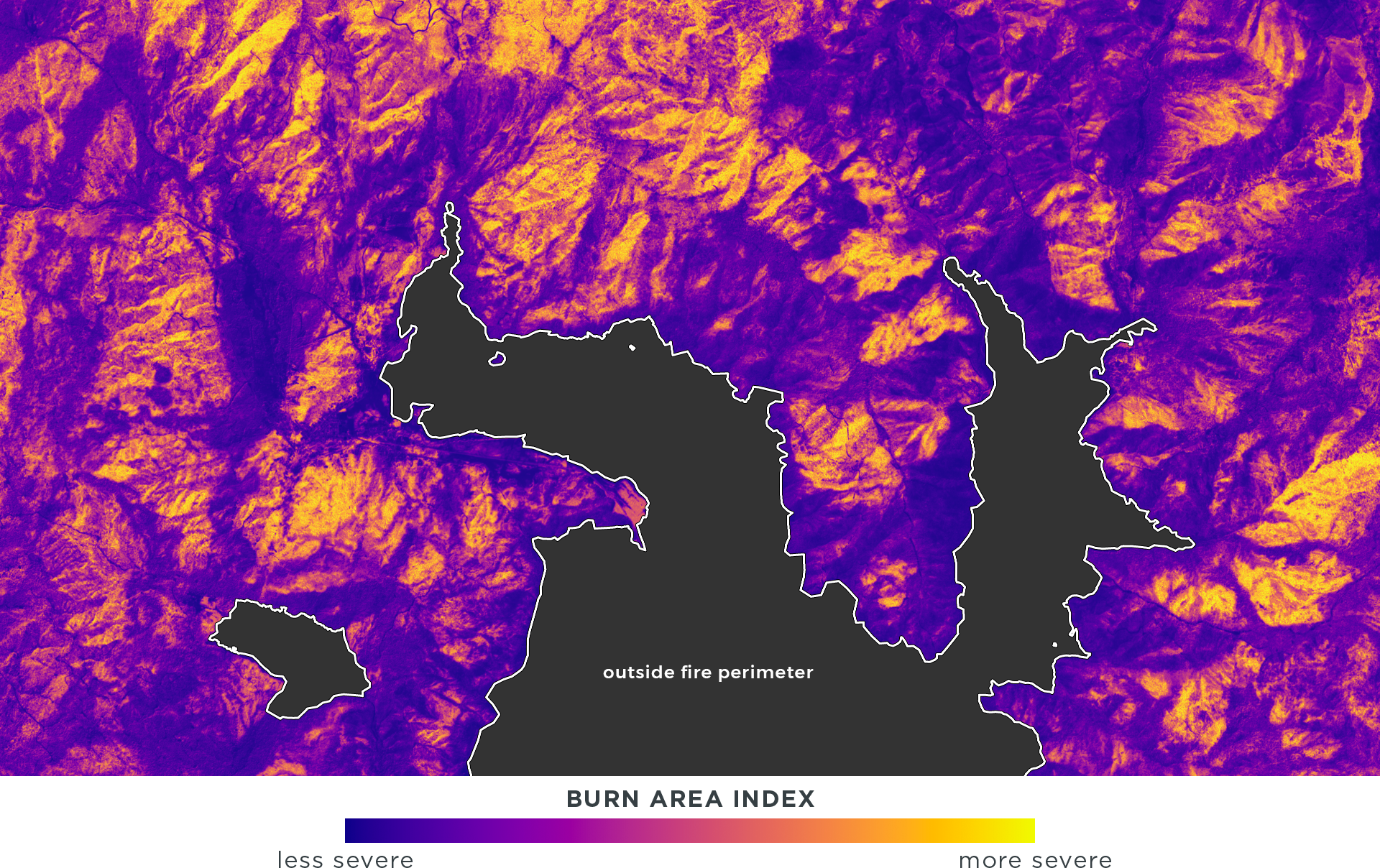 This map of burn area index derived from the red and near infrared bands and tuned to be sensitive to the reflectivity of charcoal gives a more quantitative picture of the fire’s severity. Brighter areas (yellow and orange) are more severely burned, while darker (purple and blue) are less burned or even untouched by the fire. This and other satellite data can provide a useful estimate of a fire’s impact, but become much more powerful when combined with on-the ground measurements.

The increasing frequency, size and severity of wildfires in California is straining fire-fighting resources and threatening communities along the wildland-urban interface. New tools, including novel sources of satellite data, can help mitigate the growing risks. Up-to-date maps and better understanding of the fuels available to a fire can aid land managers in their efforts to maintain healthy forests. During a fire, daily Planet imagery can provide a broad yet detailed view of the situation, augmented with precise, high resolution data in important locations. Even following a fire, near-real time data can speed damage assessment and help guide burned area rehabilitation efforts.