In the Colombian Amazon, PlanetScope imagery shows changes in forest cover in and around Chiribiquete National Park. © 2021, Planet Labs Inc. All Rights Reserved.

It’s been nearly nine months since Norway’s Ministry of Climate and Environment (NICFI) awarded an international contract to KSAT, Planet, and Airbus. Since the launch of the coalition, initiatives across the world have been leveraging Planet’s high-resolution satellite imagery of the tropics, free of charge, helping to save the world’s tropical forests while simultaneously improving the livelihoods of those who live off of and near the forests.

To achieve the objectives of the NICFI Satellite Data program, the initiative has focused on several tracks: partnerships with the private sector as a means to enable deforestation-free supply chains; large-scale partnerships with key forest countries to demonstrate that action on a national level is attainable, thereby supporting the commitments made in the Paris Agreement; multilateral initiatives to ensure progress towards REDD+ and sustainable land use; and supporting NGOs, research institutions and civil society organizations to further advance scientific research and development and learn through field experiences.

The following collection of stories demonstrates the ways in which NGOs and Governments across the world are making progress towards reducing and reversing tropical forest loss.

The Central African Forest Initiative (CAFI) — a partnership initiative between a coalition of donors and six partner countries including the Central African Republic, the Democratic Republic of the Congo (DRC), the Republic of Cameroon, the Republic of Congo, the Republic of Equatorial Guinea, and the Republic of Gabon — is now using the Planet-NICFI data to validate and classify drivers of deforestation and degradation to protect the Congo Basin Central African forest. This work is critical to improved land cover mapping, management, and reporting. According to Remi D’Annunzio, REDD+ National Forest Monitoring Coordinator for Africa, UN-FAO, “Anywhere in the Central African forest where degradation is happening – we were missing a substantial amount of even easy to detect degradation with anything else other than the Planet-NICFI data.” In partnership with UN-FAO, CAFI is hosting regular workshops with technical practitioners from the six-member countries and beyond to support their work with the NICFI-Planet data, including helping implement dense time-series approaches to track and classify drivers of deforestation and forest degradation over time.

Colombia’s Ministry of Environment and Sustainable Development (IDEAM) has found the NICFI-Planet data helps reduce uncertainty in their forest area change and carbon estimates, validating national land cover maps over the archive and monitoring terms. They expect the Level 2 (Scenes) data to contribute especially to early deforestation warning systems and enforcement of zero-deforestation laws and agreements. In IDEAM’s words, “Colombia’s Ministry of Environment and Sustainable Development, through IDEAM, is using the three levels of access available through the NICFI Data Program – Planet’ Visual and SR Basemaps, as well as Airbus Archive and Planet Scenes. Its objectives are oriented to improve historical and follow-up estimates of changes in the forest area which are oriented to measure among other studies the deforestation of the country; detect and respond more easily to forest fire events; and contribute to the interpretation of changes in land cover among other aspects of the work of monitoring ecosystems.”

Lao People’s Democratic Republic (Lao PDR) is working to achieve Reduced Emissions from Deforestation and Forest Degradation (REDD+) pledged in its Paris Agreement commitments. They have entered an agreement with the World Bank Forest Carbon Partnership Facility (FCPF) to receive performance-based payments for these reduced emissions. A key condition is working to reduce the uncertainty of emission estimates due to forest degradation from selective logging and shifting cultivation. The Collect Earth Online platform’s Geo-Dash Degradation Tool has been instrumental to this work. Mr. Khamkhong of the Forest Inventory and Planning Department of Lao PDR said, “Collect Earth Online now offers many types of imagery – PlanetScope, Sentinel-1, Sentinel-2 – for various time periods that enable us to understand the historical land cover change accurately.”

Another initiative, SERVIR, a joint development project between NASA and the United States Agency for International Development, provides local decision-makers with the tools, training, and services they need to act on climate-sensitive issues. Their Regional Science Coordination teams for West Africa and Amazonia, in particular, have been busy putting the NICFI-Planet data to work for key forest and climate objectives.

Take, for example, SERVIR’s ecosystem monitoring projects in Ghana and Peru – two regions where forests are threatened from small-scale deforestation and forest degradation associated with artisanal gold mining and selective logging. With the higher spatial and temporal resolution data available through the NICFI Data Program, these projects are now better equipped to detect mining-associated degradation, helping pinpoint illegal operations and target regrowth areas. When speaking about the satellite data, Emil Cherrington, Regional Science Coordination Lead for SERVIR-West Africa and land cover specialist said, “Accessing Earth observation data at a finer level of detail and at a higher frequency is already opening up new opportunities for land cover, land use, and ecosystem monitoring services.” 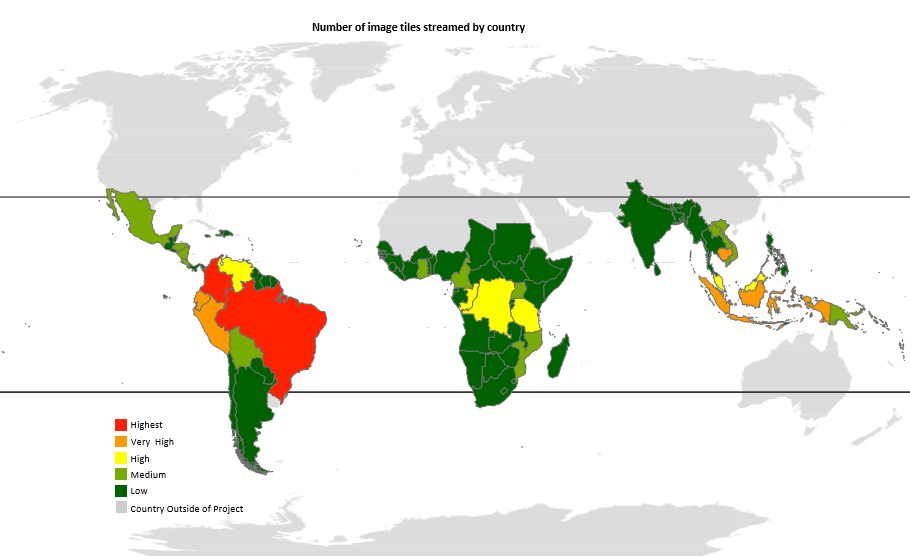 As governments from around the world are making an impact in reducing tropic forest loss, NGOs and educational institutions are also finding success in their initiatives.

For example, the Conflict and Environment Observatory is using Planet-NICFI Data to assess the current state of forest loss in conflict areas. Their work found that forest loss increased by 10% in 2020 in areas of active conflict which equates to approximately 1.1 megatonnes of CO2.

As one Haka Indonesia team member shared, “We use the Planet satellite imagery to validate alerts. It is important in law enforcement activity, and also very useful in helping us prioritize our work – where to protect, where to target regrowth.”

Concurrently, Amazonica Por la Amazonia is applying the data to validate deforestation and to enforce on forestry crimes in the San Martin region of southern Peru while the Center for Global Change and Sustainability in Mexico is using Planet-NICFI data in the Usumacinta River basin between Guatemala and Mexico to estimate forest area change from deforestation and degradation, as well as other land cover changes.

Further applications of this data have been used by Miami University to train local governments and NGOs in the tropics to detect wildfires, map human-caused fires, and make policies to manage. “One of the best things about the Planet-NICFI data is that it is already orthorectified and georeferenced .. The mosaics are really helpful in communicating change, particularly in cloudy areas,” shared a representative at Miami University.

Conservación Amazónica (ACCA) integrates science, innovation and communities to conserve the Andean Amazon, using Cloud Computing, Artificial Intelligence Algorithms and high-resolution imagery to study and detect new fronts of degradation and deforestation caused by logging, mining, and fire activities. Also, as part of its Earth Observation activities and current collaboration with SERVIR-Amazonia and the Spatial Information Group (SIG), they developed the RAMI Platform to visualize and download radar-based mining alerts and validate them with high-resolution data. ACCA’s objective is to allow the Peruvian Ministry of Environment, and their stakeholders to improve precision, accuracy and efficiency of the deforestation detection due to mining activities by creating a chain of forensic evidence, so that prosecutors or judges can better enforce the environmental law.

These examples from governments and NGOs across the globe is a small sample of the work being done to increase transparency and accountability in tropical forest countries that is leading to improved policies for sustainable forest management and land use. Ultimately, this work will protect not only the forests themselves but also the indigenous peoples and other species whose lives depend on them.

If you’re working to reduce and reverse tropical deforestation, visit us to learn more about the NICFI Satellite Data Program.